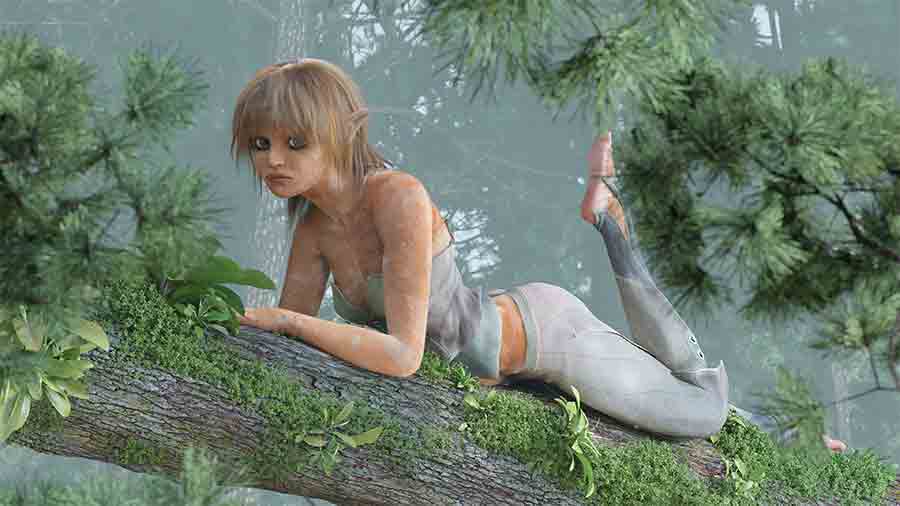 Sometimes I see an image in my head and create it, then form a little story around it, as I did in this case. I kept seeing Asherah the Elf laying on a branch. A short scene helped flesh out that idea. In this scene, Steven learns not to tempt a mischievous Elf. I would say this takes place in and around Book 2 of the Crow series. If you like this, please check out my first novel in the Crow series – Crow: The Awakening (Crow Series, Book 1) – https://mjv.com/Crow-The-Awakening-AM

“You know you can’t hide from me.”

“I’m not hiding from you.” Asherah squinted at Steven as he clambered onto a neighboring branch.

“It sure seemed like it.” Steven frowned, looking down. The fog obscured the forest floor far below, making them seem to be even higher than they were. He sighed. “You know most Terrans cannot climb this high.”

Asherah just looked at him.

Steven scratched his head. “He didn’t mean it. He yelled at Moringa too.”

Asherah wiped her nose and put her head on her hands as she lay on the branch.

“Come on. He feels terrible.” Steven swung his legs back and forth impatiently. “He wants you to come down so he can tell you.”

“Yes.” Steven shrugged. “It was a spectacular catch.”

“He kept both toes inside.”

“He shouldn’t have yelled at me.” Asherah looked at Steven glumly.

“And he knows it.” Steven picked at the bark. “It’s just that, you were rooting for both teams.”

“I was happy for them.” Asherah lifted her head. “They both played a really good game.”

“It was a good game. But we lost.” Steven scratched his arm. He knew where this was going.

“We were not playing.” Asherah frowned at Steven. “They were.”

“Why do you choose a side? It is a contest of skill, not of sides.” Asherah put her head back down and looked at Steven.

“I just, we, it’s…” Steven stammered. He scowled when he felt something from her through their bond. “You’re baiting me.”

Asherah shrugged, grinning mischievously. “You are too easy.”

“I think I shall let him consider his guilt a bit more.” Asherah sat up on the branch. “He should have stopped when he yelled at Moringa.”

“That was like, weeks ago.” Steven held his hands out. “He gets into the game. That’s all.”

Asherah stood up and jumped onto Steven’s branch smoothly. He scooted over a little to give her room, but she just knelt down next to him. “We get into the game too.”

“Um…” Steven fidgeted. She had that mischievous look again. Without a warning, she grabbed his legs and lifted, letting go as Steven fell backward off the branch.

The branches below whipped past his face and Steven had to twist to avoid some of the larger ones until he found a branch he could grab, slowing his rapid descent as he let it pass through his fingers. He grabbed another branch and used its elasticity to swing him onto a thicker branch. Asherah was there waiting for him, leaning against the trunk.

“You naughty Elf.” Steven pointed a finger at her.

“You shouldn’t be defending Ryan.” Asherah looked at him.

“I wasn’t. I was just trying to explain Terran…habits. That’s all.” Steven held his arms out innocently. Asherah crouched and raked his feet out from under him, and he found himself falling again.

Sighing, he grabbed more branches and found another larger one to land on. He could see Asherah matching his pace out of the corner of his eye, and she landed gracefully next to him and wrapped an arm around his waist.

Steven tried to glare at her. But she was too cute to be angry at. Plus, she was at least having fun now, rather than pouting.

“I’ll talk to him,” Steven said. Asherah squinted at him. Steven held his hands out again. “Really!”