Asherah and the Teles’trike Dragon 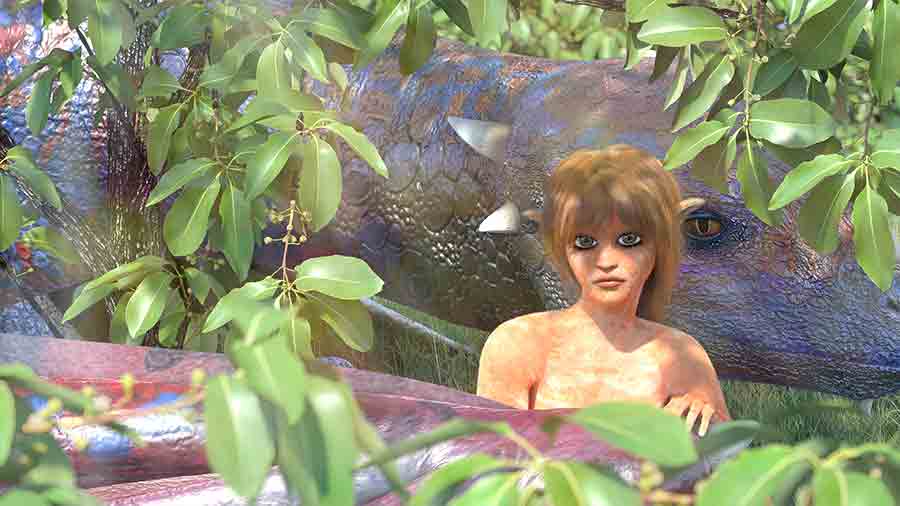 This cute little glimpse into the world of Steven Crow takes place within the time-frame of Crow: The Awakening. It helps illuminate the relationship between Steven and Asherah while he was still hanging out with her in their meadow. A little education on Endard’s dragons is thrown in for good measure. If you like this, please check out my first novel in the Crow series – Crow: The Awakening (Crow Series, Book 1) – https://mjv.com/Crow-The-Awakening-AM

“Think it will eat me?” Steven looked up nervously.

“Probably.” Asherah cocked her head as she also looked up.

“Maybe we should run?”

Asherah shrugged. “It’s flying. I do not think we can outrun it.”

“Then we just need to stand really still? I saw a movie that…well, it was a T-Rex, but same difference, right?”

Asherah gave him a perplexed look, then ran squealing towards a cluster of fruit trees by the edge of the meadow.

Steven threw up his arms. “Or we could run and make as much noise as we can. Perhaps we’ll scare it away?” He flinched as a large shadow passed overhead. “Asherah, it’s behind you!”

Asherah ducked under the trees and looked up, wide-eyed.

A large, vividly colored dragon landed deceptively lightly on the grass by the trees, almost hovering as it touched down. Asherah squealed again and ran around the tree.

Grimacing, Steven tried to stay in the dragon’s blind spot as he attempted to make his way towards the trees. He froze when the creature turned its head to look at him.

Asherah threw a branch at it, distracting it. Steven took in a breath and continued sneaking toward the trees. He briefly lost sight of Asherah and considered calling for her. But, the dragon. Steven scowled as he hurriedly pushed through the vegetation until he came upon a peculiar scene.

Asherah was sitting in the grass, leaning back against the dragon’s head as she caressed its wing.

“You helped me with my homework, silly.” Asherah giggled. She patted the wing. “We are not their normal prey.”

“Oh. Sure. So, let’s just snuggle with a vicious predator.” Steven crossed his arms.

“She is not vicious at all!” Asherah said defensively. She looked around at the dragon. “Don’t listen to that mean boy.”

Staring nervously at the dragon, Steven frowned. “What does it eat?”

“Terrans.” Asherah poked at its scales.

Steven gave her a look, and she shrugged. “You’re not connected to them. Who knows?”

There was another thud behind him and Steven spun around, startled. “Crap!”

Another dragon sniffed him. Steven backed up, almost tripping over the wing of the first dragon. “Okay, this is getting a bit much.”

Steven looked at her blankly. She pointed. “What is that?”

Steven glanced at the dragon. “Teles’trike.”

“Anything that’ll fit in that ginormous mouth.”

Asherah blinked and raised her brows, not amused. Steven rolled his eyes. “Large fish, Teles’nere dragons, large birds, medium sized creatures.” He held his arms out. “I could be classified as medium sized.”

“Well, they tend to ignore us. Not sure about Terrans, but humans are fine around them.” Asherah stretched her arms and casually picked a parasite off one of the scales. The Teles’trike shuddered and Asherah grinned sheepishly as she was shaken.

Steven sighed. “Yeah, not making me feel any better.” He gazed longingly back at the solitary tree in the center of the meadow. No big dragons were hanging out under it. “My laptop is still over there.”

Asherah looked up. “Probably not raining until later today. Come. Sit with me.”

“A little too close to that jaw for my comfort.” Steven shivered.

Asherah held out her hand expectantly. “Elves have a deep connection to life. She’s perfectly tame.”

Pursing his lips, Steven looked at the dragon critically. It appeared like it was smirking at him.

“Implicitly,” Steven said without hesitation. He slumped as he walked around the wing and plopped down in the grass next to her.

“Pet her. There. Pull off that tick.”

“Ew.” Steven made a face. He looked at a stern Asherah, then reluctantly complied. The large parasite took a hard yank to remove, and he threw it away quickly. “Those things are nasty.”

Asherah bumped him with her shoulder. “She likes you. That’s why they tolerate us.”

Thoughtfully regarding the dragon, Steven raised an eyebrow. “Great. So now I’m a plover.”

Steven glanced briefly at her. “A crocodile bird. Cleans the mouths of crocodiles. Doesn’t get eaten.”

Asherah giggled. “You’re funny. You do not even have any feathers.”

Steven opened his mouth to explain himself, and Asherah laughed out loud, pushing on him until he fell over. He grinned as he lay in the grass, looking at her while she rocked back and forth, humming their ballad. She winked at him and leaned back against the Teles’trike again.

“What sort of connection do you have with them?” Steven glanced at the dragon. “Can you make it do stuff?”

“Friends that could eat you.” Steven smirked. “I play with bears and cougars back home. They seem to get me. But this?” He waved at the Teles’trike. “Yeah, no.”

“One day I’ll show you the dragons of Senin.” She looked at him thoughtfully. “We cannot form a connection to them, sadly. But they’re gorgeous dragons. Electrifying.”

“Well, that’s all that matters, right? It’s got to be gorgeous. Who cares about the teeth?” Steven grinned.

Steven looked over at the tree in the center of the meadow again. A smaller, dog-sized dragon was playing in the branches. A Teles’nere. “If that thing breaks my laptop, Jonah is going to kill me.”

“Why would he kill you?”

Steven glanced at her and smirked. “Terrans are funny like that.”

Asherah almost gaped. Steven laughed as he got up on his knees. “It’s a euphemism. Didn’t you get that from your English lessons?”

“Terrans are so weird,” Asherah mumbled as she got to her feet with Steven.

“Yeah. But weird is fun,” Steven said. He flinched when the second dragon abruptly jumped and took to the air. “Snap. That thing is big.” He looked at the first and locked eyes with it briefly. It too jumped and became airborne, nearly knocking the two of them over with the gust. Smaller Teles’nere dragons in the branches of the forest took to the air, fleeing the two large Teles’trikes that chased them.

Something clawed Steven’s back, and he yelped as he spun around. Throwing a branch down, Asherah took off running across the meadow, giggling madly. “Uncool!” Steven yelled, then took off after her.