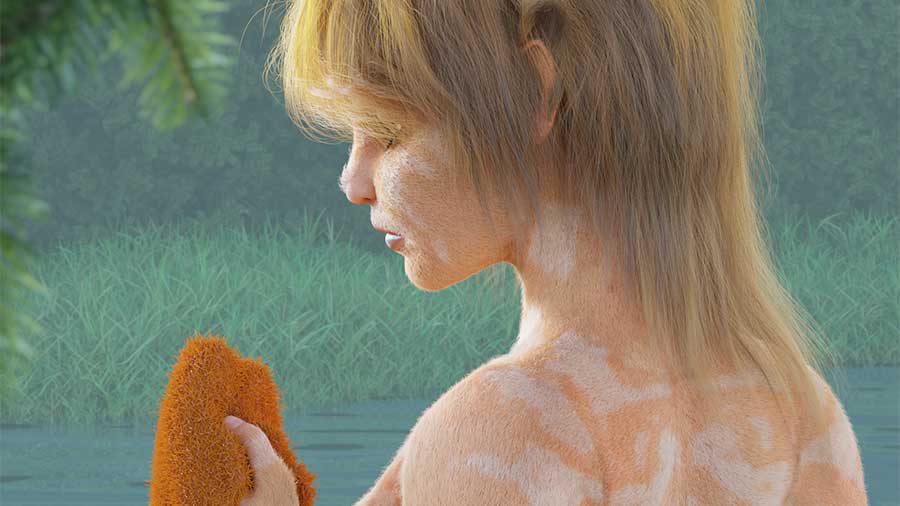 Here is a snippet that is not in any of my books, but takes place between Book 2 and Book 3 of my Crow series. I included an image of Asherah standing in the river, about whom the snippet was written. If you like this, please check out my first novel in the Crow series – Crow: The Awakening (Crow Series, Book 1) – https://mjv.com/Crow-The-Awakening-AM

“Asherah!” Steven appeared on the riverbank out of thin air and waded through the tall grass, trying to get closer to the water’s edge. “Please. Cover yourself.” He tossed a towel at her.

She caught it deftly and looked at Steven, confused. “Why?”

Steven glanced up and down the river. “People fish these waters.”

“No one is near.” Asherah tossed the towel back at Steven. “Why are you afraid?”

“You got shot out here, for one.” Steven fumbled with the towel, dragging it from the water and shaking it. Sighing, he gave up and the towel vanished. “For another, you’re naked.”

“Who bathes wearing their clothes?” Asherah splashed the water with her feet. “Look, fish!”

Steven glanced at the trout that were swimming past her ankles. “Yes. Fish. Now, let’s go.”

“I haven’t had a good swim in weeks. Swim with me.” She held her hand out.

Steven scowled. “I’m trying to…” He abruptly found himself standing in front of her. He glanced at the bank where his clothes remained. “You know, gating me without warning could cause problems.”

“Like what?” Asherah put her arms around his waist.

“If I gated when you did that, it would be…catastrophic.”

“Then don’t gate when I do that.” Asherah giggled. “Let’s swim.”

“There are three fishermen a quarter mile upstream. Another one downstream.”

“Then whisper.” Asherah played with Steven’s hair. “Steven, they’re just Terrans. They can’t sense us like we can sense them.”

Steven shook his head, reluctantly following Asherah when she pulled him into the deeper part of the river. “There’s a hunter a mile East of us.”

“I’m not going to get shot again, Steven.” Asherah wrapped her arms around Steven’s neck while they tiptoed in the deeper water, just barely resisting the slow current.

“They’re going away from us.” Asherah poked Steven’s nose.

“What if they turn?”

“Steven, why are you so afraid?”

“You’re doing this on purpose, aren’t you?” Steven evaded her question.

“You know we can’t stay here.” Wrapping her legs around Steven’s waist, Asherah leaned back and splashed in the water with her arms. “Hiding all the time? You know that, right?”

“I’ve already committed to getting approval to move.” Steven held her knees when she started slipping. “Your precious Cooperative is still hung up on this deviant thing and it’s just getting stupid.”

“Syagria wants you. Endard too. I know you’re nervous about leaving Terra.” Asherah dipped her head underwater briefly then surfaced, shaking her hair. Steven closed his eyes when he was sprayed. Asherah laughed, pulling hair from her eyes.

“Two. Out of what, a thousand systems that think I’m a monster intent on demolishing their worlds?” Steven played with the fur on her legs, dejected. “This deviant thing is really getting old.”

“That deviant thing is why I can gate.” Asherah relaxed her legs and floated away from him. He floated with her, trying to keep up.

“Yeah, well. You’re supposed to be keeping it secret. You know the Sadari and the Order can detect when we gate.” He splashed at her.

She giggled then looked up as she wiped water from her eyes. “Not through that.”

Steven glanced up. The gate at the homestead created a spectacular light-show of radiation as it overwhelmed the Sadari blockade. Asherah seemed transfixed by the view only Gatekeepers could see. “It’s annoying.”

“It hides us when we gate close to the homestead.” Asherah said.

“We think. Terrans may not be able to, but maybe the Sadari can see through it. See us when we gate.”

“Our own gate-detecting technology is scrambled by it.” Asherah splashed back at him.

Steven sighed. “We have to hide here all the time. And we’re not welcome in the Cooperative. We don’t have a home, Asherah.”

Asherah pouted as Steven swam to the shore. “We’ll get our home, Steven. Just stop being so afraid all the time.”

Steven stood up in the shallows. He was about to respond when Asherah yelped and ducked below the water. Bubbles erupted from the stream where she had been and Steven felt her gate back to where their clothes were sequestered. It was then that he saw and sensed the fisherman casually casting a line downstream. His back was to them, but just a glance would have been all it took.

He quietly waded to the shore and clambered through the grass. When he turned to work his way back upstream he bumped into someone. But it was like bumping into a tree, except this was a particularly petite brunette who grabbed him to keep him from falling back.

“Rachel!” Steven whispered loudly. “What are you doing here?”

“Do you really need to ask?” She glanced past Steven at the fisherman who cast another line. “You’re spending a lot of time with that Elf.”

“And you have my parents.” Steven scowled, squirming in her iron-like grasp.

She let go of his arm then appraised him, amused. “Skinny dipping?”

“Who wears clothing to bathe?”

“I heard your remark about not having a home.” Rachel moved closer to Steven.

Rachel frowned prettily, batting her eyes at him.

Grumbling, Steven walked past her towards Asherah. Rachel followed. “You can keep her if you want.”

“I’m sure you’d like another pet Elf.” Steven looked back at Rachel angrily. “Kinda like my mother?”

“You’d get to see her.” Rachel matched his pace. “Perhaps understand why I have her.”

“Not interested in understanding, Aliya.” Steven stopped and faced Rachel.

Rachel grinned. “I like it when you do that. When you call me by my name.”

“Come meet me face to face.” Steven crossed his arms. “I’m tired of talking to your golems.”

“Steven, I’m not a toaster. Rachel is me as much as any of my golems. My body.” Rachel pouted while tracing a finger on Steven’s chest. “You’re talking to me now. Face to face.”

Throwing his hands in the air, Steven sighed in frustration. “Just release my parents.”

“Just come with me.” Rachel put her arm around Steven’s waist seductively. “I almost lost you when you were ill. I want you with me.”

“You never had me, Aliya.” Steven tried to pull Rachel’s arm away. He might as well have been trying to move a bronze statue. He scowled at her, water starting to steam off his skin. “Let go or I’ll break your golem.”

Rachel giggled. “I like it when you’re assertive.” She relented and took a step back. “I’ll always be here. If you want to see your parents, just ask.” She held her arms up. A metallic tentacle shimmered into view and wrapped around her. In an instant, she was yanked into a hovering golem-ship that was only briefly visible. Steven could still see the shimmer of its cloak as it ascended rapidly.

“She knows about me.”

Steven jumped, startled. Asherah emerged from the tall grass by the bank with his clothes.

“You get your ability from me. Our gating signatures are identical.” Steven pulled his shorts on. “As far as she knows, only I can gate through her blockade.”

“Does she know we are…” Asherah left the question hanging.

He returned his attention to the sky. “She doesn’t know we are bonded.” He glanced at her. “If she finds out, she will kill you.”

Asherah nodded, following Steven’s gaze. “That is why you are afraid.”