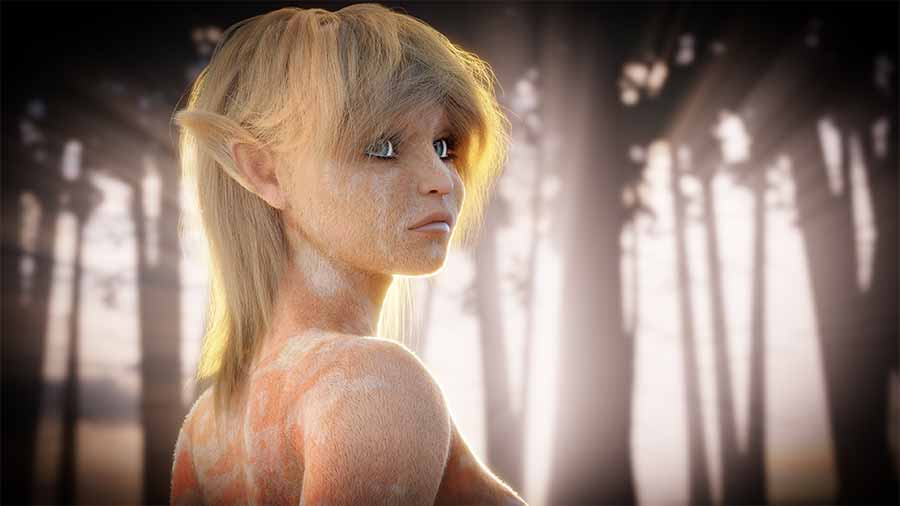 This short takes place within the time-frame of Book 2 of my Crow series. It helps illuminate the depth of Asherah and Steven’s relationship, in this case through a shared dream thanks to their bond. If you like this, please check out my first novel in the Crow series – Crow: The Awakening (Crow Series, Book 1) – https://mjv.com/Crow-The-Awakening-AM

Steven squinted into the bright morning sun as he walked up behind Asherah. “Enjoying the dream rays?”

Asherah glanced at him over her shoulder. He could tell she had been crying.

“Um…” Steven stopped as he got close. “Did I do something?”

“You’re leaving.” She returned her attention to the sunlight streaming in through the forest.

“Not here.” Asherah sighed and wiped her eyes.

Steven looked down and shrugged. She didn’t see him, but he knew she felt it. Their shared consciousness. “This is just a dream, Asherah.”

“Am I supposed to, what? Stay asleep?” Steven held his arms out, exasperated. “I have to get a grip on this…whatever.”

“We could put you in stasis.”

“Lohet already indicated how unwise that would be. What with me being a deviant and all.” Steven retorted sarcastically. “Can’t have me popping my lid and blowing up a planet or something.”

Asherah turned to face him. Steven immediately felt guilty for his attitude and steadfastly examined the ground by his feet. “Remember my nightmare? The people I hurt?”

Steven shrugged again. “They don’t think it will take a long time. You know. To fix me.”

“If they can.” Asherah took a step closer and caressed his face, lifting his chin up so he looked at her. “What if they cannot? Not soon enough?”

“They will. I’m not going to spend the rest of my life in a dream.” He looked around. It all seemed real enough, but he knew it wasn’t. “Waiting for you to come visit me. Never seeing…” Steven bit his lip. “You’re supposed to be encouraging me. Helping me.”

“I’m terrified.” Asherah held Steven’s hand to her cheek. It was wet and furry. “They’re going to mute our bond. I won’t be able to visit you. Experience us.”

“You’ll be able to see me just fine.” Steven fidgeted. He remembered the few minutes their bond had been muted before, and how uncomfortable it was. “I just won’t have access to you.”

“It’s not that, Steven. I experience you experiencing me. A feedback.” She touched his skin. “I can feel my fingers on your face, from your perspective. I won’t have that. It’s…” She stopped and shuddered.

“It’s nothing like a bond breaking,” Steven said. “Penipe went through that, remember?”

Asherah nodded, unconvinced. “Last time was only for a few minutes. But, this could take days. Weeks even.”

“It’ll be like I’m asleep,” Steven said flippantly, then frowned. They both were asleep now. In each other’s dreams. “Yeah, you won’t be able to visit me.”

Asherah shook her head sadly. “Not through the mute. You’ll be alone.”

“Great job making me feel better.” Steven scowled, looking past Asherah at the edge of the forest. The sun was rising further, revealing more detail. “Our meadow.”

Steven sighed. “You’re worried about the Sadari. You know they always know where I am, and they haven’t tried to hurt me yet.”

“Aliya is obsessed with you. That scares me.” Asherah shivered.

Steven shrugged. “She has my parents. Let her be obsessed with me. Sooner or later…”

“We spanked him pretty hard last time. Kinda doubt they’ll be a problem for you guys.”

Asherah looked at him knowingly.

“Okay, so…yeah. He’s a problem. I’m more worried about him than Aliya.” Steven scratched his arm as he looked away. Laurence still bothered him. “But what choice do I have?” He looked back at Asherah, but she had vanished. “Asherah?”

Steven sat up and took a breath. He winced as the buzzing in his head returned. He looked down at Asherah who was still deep in her slumber. Closing his eyes, he saw her still standing at the edge of the meadow, meditating in the morning sunshine. Sighing, he lay back down, then looked at the door of the bedroom. “You really need to stop doing that. It’s creepy.”

Lohet stood in the moonlight, his pale skin almost glowing. He gazed at Steven without expression.

“You remind me of a vulture.” Steven grumbled as he looked up at the ceiling.

He sensed Lohet retreat back into the living room. Sirel was out there. He closed his eyes and sensed his adoptive parents in their room. Penipe on her sleeping mat. Moringa and Brandon tangled in each other’s embrace. His most peculiar family. He felt homesick again, and the fear of leaving all of this hit him. He wiped his nose and rolled over. Sleep did not come easily that night.