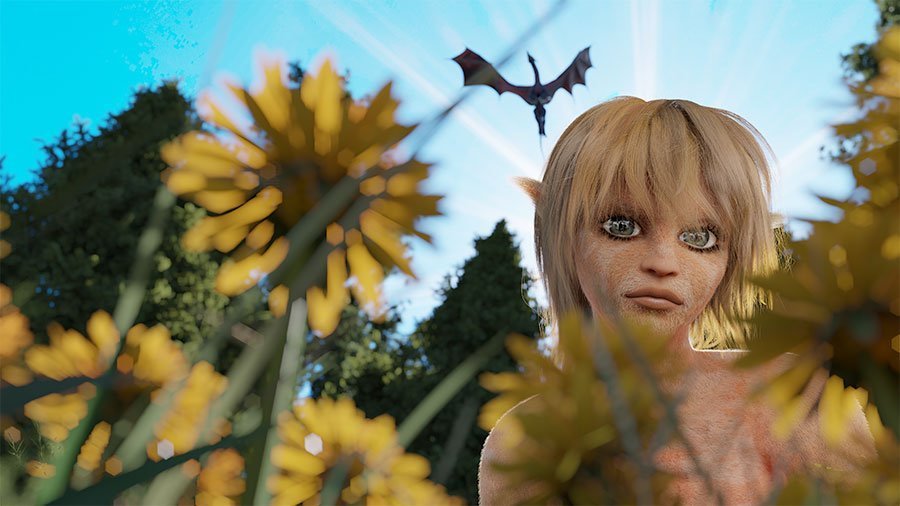 This short takes place within the time-frame between Book 2 and Book 3 of my Crow series. I wanted to explore the effect inevitable change has on Steven, something we all go through as we transition from childhood to adulthood. Of course, he has a more extreme transition to cope with. If you like this, please check out my first novel in the Crow series – Crow: The Awakening (Crow Series, Book 1) – https://mjv.com/Crow-The-Awakening-AM

“I wanna go home, Asherah.” Steven opened his eyes when Asherah eclipsed the sun for him. He smiled as her hair seemed to glow. His Elvish angel. “Like how it used to be.”

Asherah moved her head slightly and Steven winced from the glare. “Back. Back. That’s bright.”

“Sorry.” Asherah moved her head back so her shadow rested on Steven’s face.

Steven blinked a couple of times as his eyes watered. “I never noticed. I was on Endard all that time and never even knew.” He focused on her. “Why didn’t I ever notice?”

“This was your safe place. You didn’t want to notice.”

“Yeah. Well,” Steven sighed. He glanced at a Teles’trike flying overhead. “Dragons. You would’ve thunk I’d notice dragons, right?” He shifted and propped himself up on an elbow. “Asherah, it was perfect here. You. Me. Our little world.” He lay back down. “My imaginary world.”

“Not quite so imaginary.” Asherah glanced over at a contingent of Keratian soldiers escorting supplies through the gate to Terra. Steven’s gate. They abruptly vanished as they crossed the event horizon. She nodded sadly. “I’m homesick too.”

“No one knew us. I was a nobody. Invisible to the world. You were, well, you.”

Steven grimaced. “That sounds meaner than I intended.”

“I was. Perhaps I still am.” Asherah poked Steven’s nose with a flower.

Steven shrugged and watched a massive gunship fade from view as it cloaked. He could see the shimmer pass through the gate. “Aradia is moving a lot of troops to Terra.”

Steven pursed his lips. Asherah looked at him. “They want to use you. They want you to destroy the Sadari.”

“They think you will. Because Aliya has your parents.”

“I just want them back. I couldn’t care less about her or this stupid war,” Steven grumbled. “I want…I want home. A home. Our home. Why did things have to change?”

Asherah wiped Steven’s cheek. “Such a heavy burden for one so young.”

“Shuh. You’re only, like, four years older than me?”

“We’re both too young for this.”

Steven looked at Asherah thoughtfully. “You know, on Terra, kids my age, many are going into the Army. Military. Whatever service. All over the globe. Our age. They’re armed and told they have to shoot each other because nations are mad at each other.”

Asherah played with another flower. “Here we are trained to resist the Venda. From birth almost.”

“Yeah, but they’re not even…” Steven stopped.

“I meant, I mean, we’re fighting each other. Our brothers and sisters. At least the Venda are actual monsters.” Steven made a face, wishing he could put that comment back in the bottle.

“I see your thoughts. You’re thinking of our Or’uk. And Trolls. They’re our family. The Venda refuse to be.”

“Yeah, I guess you’re fighting your brothers and sisters after all.” Steven sighed. “I can’t kill her, Asherah. Or her people. They want me to, but who am I?”

Steven glanced at her, seeing her thoughts. “No, not Syagria. I mean, yes. But…” He sighed. “I remember arguing with Sally and Jonah about going to Brandon’s. Or selling honey at the market. Or running off to the meadow here to be with you. I miss that. I go to the homestead now and it’s full of…” He hesitated.

“They’re only there because of the conflict. And because of me.” Steven chewed his cheek. “I can’t go back. Back to our meadow.”

“We’re here now.” Another gunship rumbled overhead. Asherah glanced at it and shrugged. “Sort of.”

“I want to not know. To just be like it was.” Steven held Asherah’s hand. “Ignorance really is bliss.”

“I get that reference now,” Asherah giggled. “Weird movie.”

Steven grinned. “I’m a bad influence on you.” He rolled on his side. “It’s never going to be like that again, is it?”

Asherah held his hand to her cheek. “No. But that doesn’t mean we cannot make it better.”